Last Saturday I worked in the yard for a good six hours. It was one of those perfect Pacific Northwest summer days — warm but not hot, a brilliant blue sky, a few fluffy white clouds. As I cut back overgrowth, planted a new bed of thyme, and pulled grass out of the gravel walkway, I saw all kinds of things I would have missed if I’d stayed inside at work on the computer: yellow jackets buzzing around the motherwort, hummers in the hawthorn tree, heron sailing majestically overhead toward the bay, swallowtails fluttering then landing on the flowering borage.

was lulled into a sense of wellbeing, letting thoughts float on by like the clouds overhead. I felt a profound sense of belonging and homecoming. I realized it was the second anniversary of our move back to the island. When I lived in town for six years, I always felt like I was taking care of someone else’s garden, someone else’s choice of shrubs and ferns and ground cover. But here, in this home we built ourselves and in this garden we planted, I knew I belonged. I am rooted deeply here.

I took a load of trimmings out to the brush pile in the back of the house, just on the edge of the woods. My eye lit upon a big white feather with brown horizontal bands, caught on the prickly stem of a thimbleberry bush. I picked it up, delighted, and immediately looked into the thicket to see if I could find owl pellets or other evidence someone had been dining nearby. I looked up into the cedars and firs to see if a barred owl might be roosting there. I have seen them in these woods before in the daytime, but not for a long time.

It was a beautiful, pristine feather, and I took it as a gift from the wild. I carefully brought it into the house and tucked it into a glass jar on the kitchen altar to protect it from the breeze, and went back outside to work.

It wasn’t long before the thought came: I wonder what it means? (We humans love to assign meaning to things, don’t we?) It was an unusual find, although the barred owl is fairly common in this area. But I’ve never found an owl feather here on the island before.

As I continued to pull weeds and cut back hawthorn sprouts (our hawthorn tree wants to be a grove), I pondered the possible meaning of this encounter with Owl. I thought about Owl’s majestic, silent flight and its ability to see in the dark. Both such rich metaphors. And of course, it is Athena’s emblem, the Lady of Righteous Causes and Deep Wisdom. I found the owl feather on a Dark Moon a week or so after Summer Solstice. Just ruminating on associations: dark moon, bright sun.

Then my mind’s eye leaped to the Gaian Tarot Hermit card … as I had placed a barred owl prominently on that card, as a symbol of wisdom, guidance, and intuitive vision.

The meaning of the Hermit card is, of course, taking time for sacred solitude in order to replenish one’s well, exactly what I was doing on this beautiful day. Working alone in the garden, noticing the “gossip of the neighborhood” as Gary Snyder puts it, investing in nature time instead of screen time. This is how I restore my equilibrium. This is how I connect to Spirit. This is how I nourish myself, so that I can hold my metaphorical lamp up high to light the way for others.

The owl feather also seemed to be a profound symbol of home and homecoming, coming as it did on the anniversary of our moving home. At my most fanciful, I could take it as a symbol of welcome and blessing from Owl. After all, we did move into her back yard.

This is how I glean meaning when I’m open to signs and omens from the natural world: I meditate on what I know about the animal or bird or plant, both its natural history and its mythology or folklore. I don’t run to look up canned meanings in a book or online. I might go check it out in a field guide and see what symbol or metaphor I can extrapolate from the description there. If I hadn’t asked a question and looked intentionally for an answer (like this day), I consider what I had been thinking about not long before I had the encounter.

On the other hand (playing devil’s advocate with myself here), in spite of the fact that I am an oracle-maker, a creator of tarot decks, I think it’s vitally important to remember that not every encounter with the wild is meant to be a message. All creatures in nature are autonomous. They have entire life cycles that don’t include us, except when we intrude upon them or modify their habitat. Sometimes I think that expecting the natural world to offer up messages to us is a kind of spiritual consumerism. Can’t we just respond to such a gift with appreciation and gratitude?

Perhaps, says the Wise old Hermit, wisdom comes in discerning which it is: a message, or a meaning that we ourselves assign to it — or the incredible magnificence of an up-close touch of the Wild. 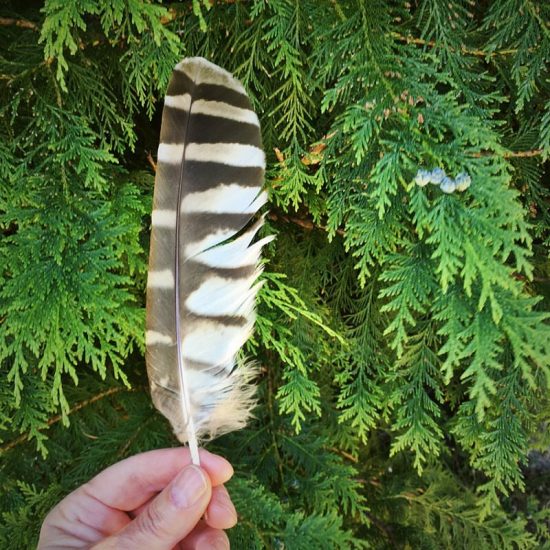 3 thoughts on “Owl: A Touch of the Wild”