1. Make plans with an island sister. Have a few ideas in mind for ceremony, and gather a few props. But keep it simple and spacious, allowing lots of time for serendipity.

2. Invite a few simpatico friends to join you on the eve of Summer Solstice. Keep the group small.

3. Host a muy delicioso dinner, since your guests are all such great cooks. Greens for the salad, freshly gathered from the garden! Homegrown artichokes, first of the season! Rice cooked with turmeric! Chicken with a dipping sauce of sunflower butter, lime juice, coconut milk, and maple syrup! Just-picked cherries! Homemade kombucha! Blueberry crisp and Coconut Bliss for dessert!

4. Sing Happy Birthday to a sister born on the Solstice, and shower her with love.

5. Wash up quickly and get to a beach on the west side of the island before 9PM, while it’s still light.

6. Set up pads and sleeping bags. Reassure a neophyte camper and help her inflate her pad. 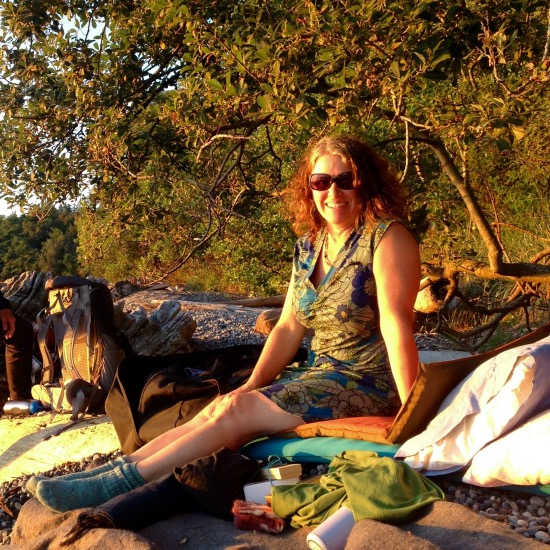 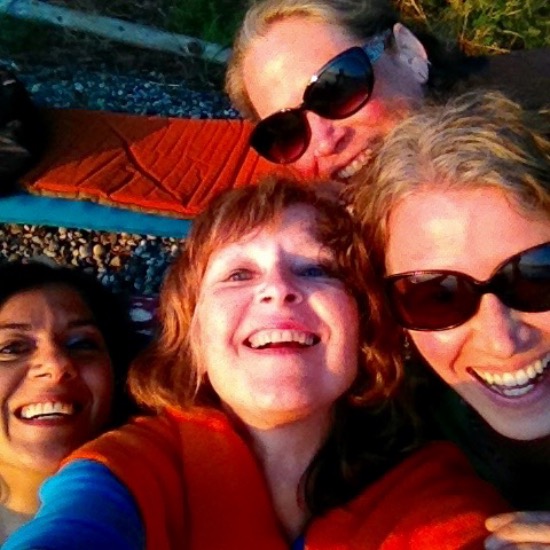 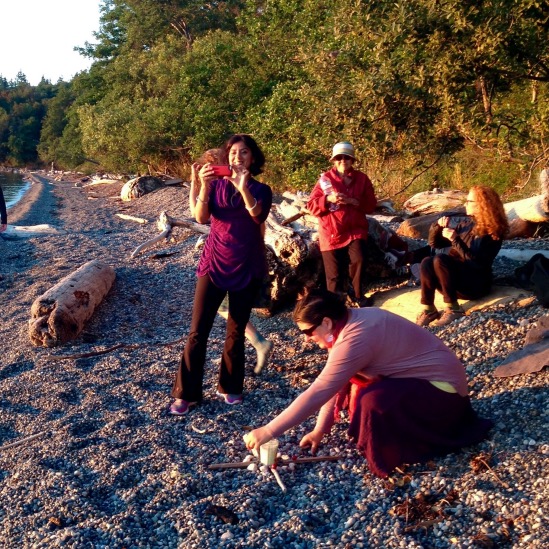 7. Settle a Guadalupe candle into the rocks and sand, since there’s a burn ban and you can’t have a fire. Light her wick. Watch her glow.

8. Create a mandala altar out of driftwood, stones, shells, seaweed, greenery, and cherries around the candle. 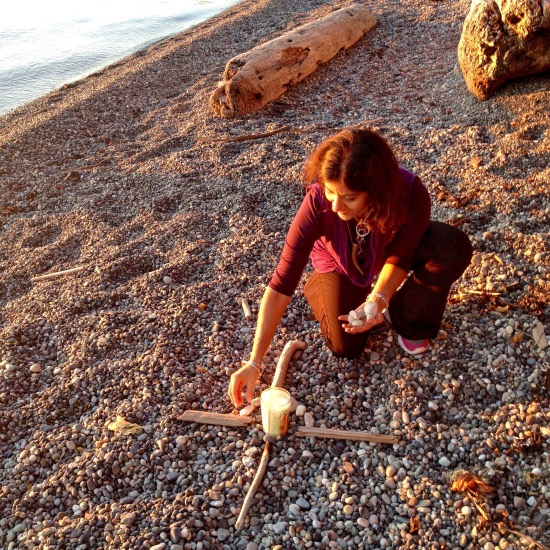 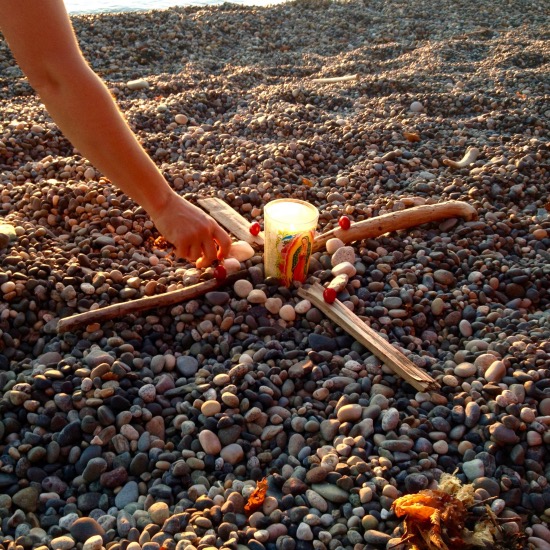 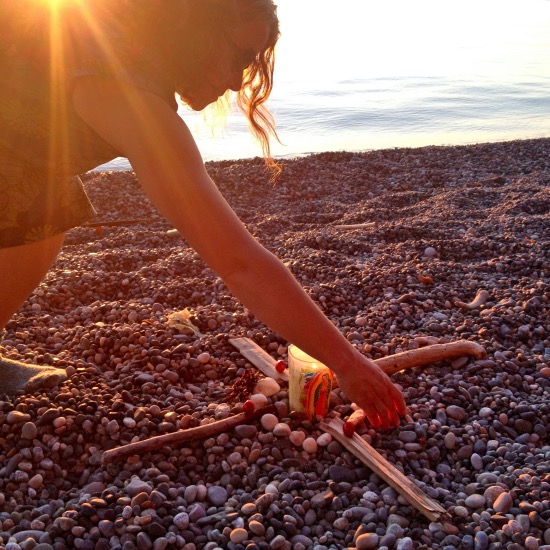 9. Settle back to soak up the sunset and watch the moon and stars come out. Watch the fish jump with great delight. Sigh in wonderment as a heron, then another, flies by . . . and then an eagle or two. Realize that the log just offshore is really a seal when it starts to swim. 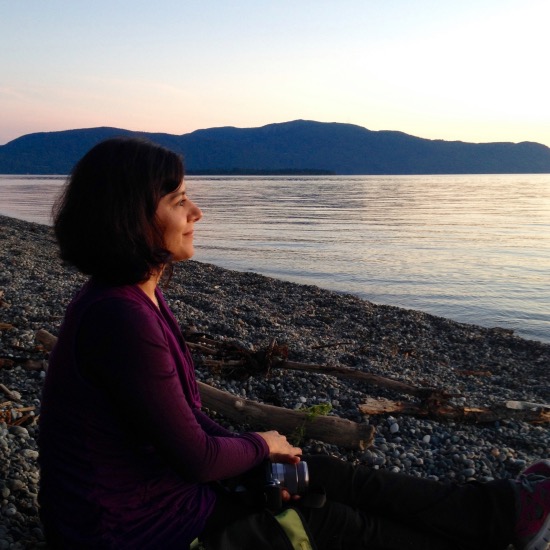 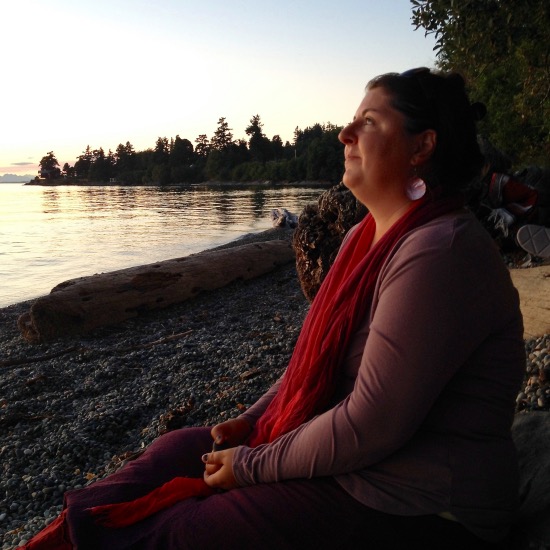 10. As the sky darkens, focus on the triangle in the sky formed by the lovely crescent moon, brilliant Venus, and sparkling Jupiter. Speak without thinking about Jupiter as the principle of expansion, balancing on point between Artemis (Diana’s bow, the crescent moon) and Aphrodite (Venus) and amplifying them both. Listen as one woman says “My word for the year is expansion,” and another says “Did you know my daughters have embraced the archetypes of Artemis and Aphrodite?” (No, I didn’t.) Watch as a lit-up barge chugs toward the north, and — just as you’re muttering about the triangle also being the sacred yoni, the gateway to life, and a trine in astrology, where energy flows with ease — watch as the barge suddenly stops right under the triangle, turns around and heads back toward the south. Gasp as a heron flies right in front of you, at that moment. What would the ship suddenly changing direction mean, if we were to read it as a sign? Perhaps to turn away from the hard work of manifestation in the North, and head back to the place of playfulness and creativity in the South. “Ah,” says yet another woman. “I needed to hear that right now,” she says with a catch in her voice.’

11. Pass around a bowl of cherries, truffles, and a plate of homemade raw fudge. Moan with pleasure.

12. Sink into the deep peace of the wild, and the bonds of sisterhood.

13. Fall asleep to the sound of waves breaking on the shore. Open your eyes during the night to watch the movement of the constellations, to listen to the waves, to feel your sisters around you. 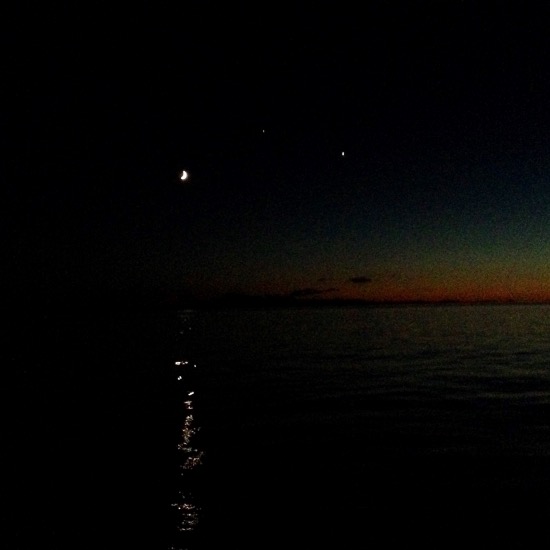 14. Get up at 4 AM (it’s already light) and notice a heron standing still at the edge of the water. Listen as the first birds begin to sing. Pack up your gear and make your way to an east side beach. Be very, very grateful for your sister who stopped at her house to pick up a thermos of coffee and a basket of china mugs. 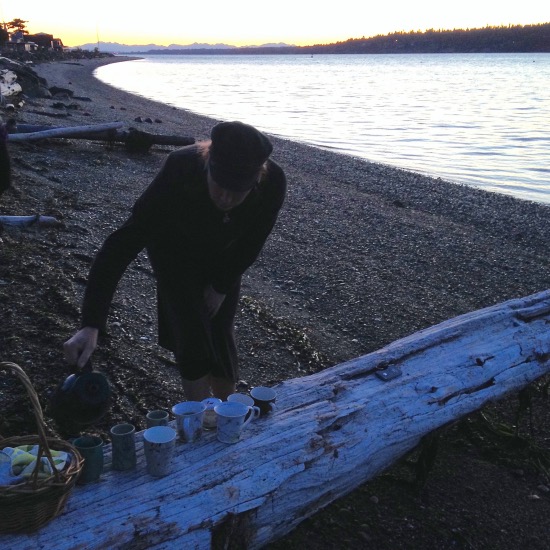 15. Watch the colors of sky and sea shift and change as dawn slowly arrives.

16. Greet the Mighty One, Komo Kulshan, with great grace and joy. 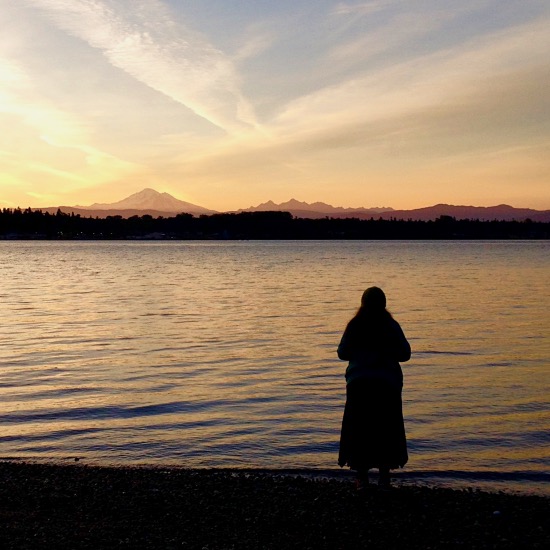 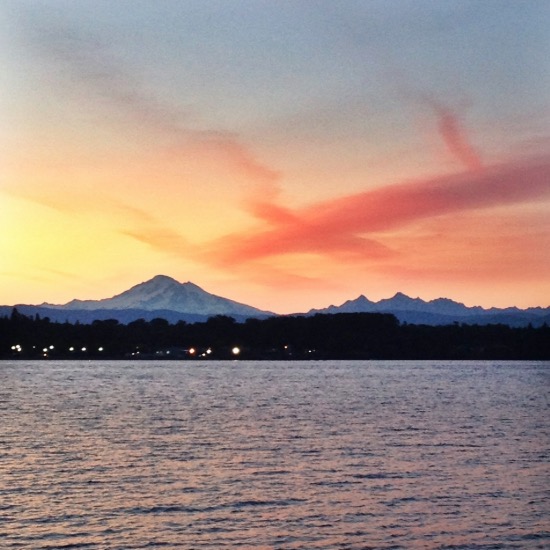 17. Hear the call of a loon. Watch as two eagles soar above. See a heron circle overhead.

18. Toss flowers into the waves with silent prayer. 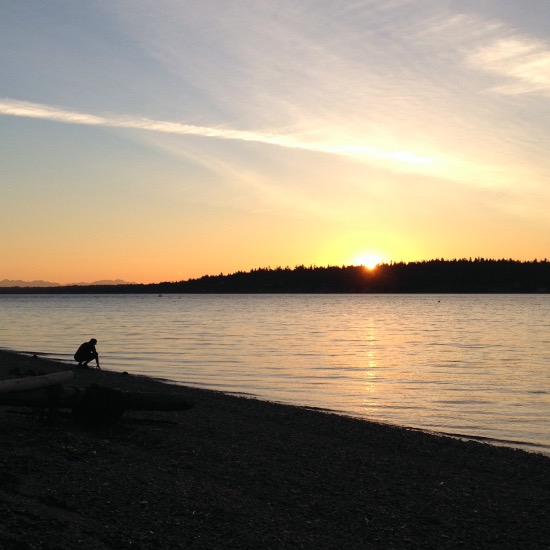 19. Greet the Sun as oh! She rises. Dance, gesture, be still. Let your soul be filled. 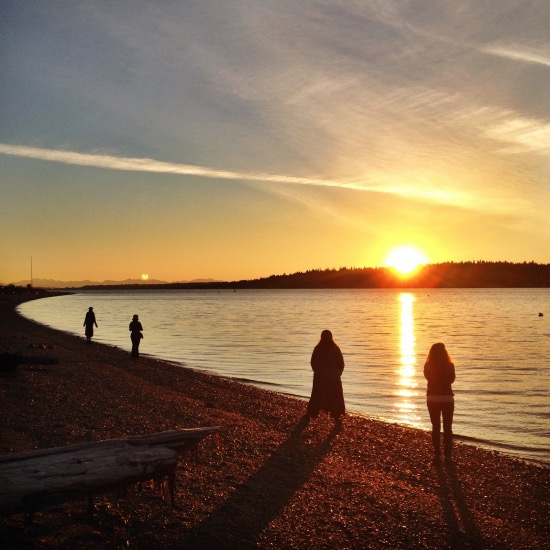 20. Stay on the beach sipping coffee, and gathering stones, shells, and beach glass until the sun is well above the horizon. Bid her farewell.

22. Catch the 10 AM ferry and head to town to “sweat your prayers” for two hours at the 5Rhythms studio. Give and receive hugs from old friends you run into there. Dance the Solstice in.

23. Have lunch and good conversation with two sisters at a favorite local cafe.

24. Head back to the island and soak up more sea and sun for a few hours. 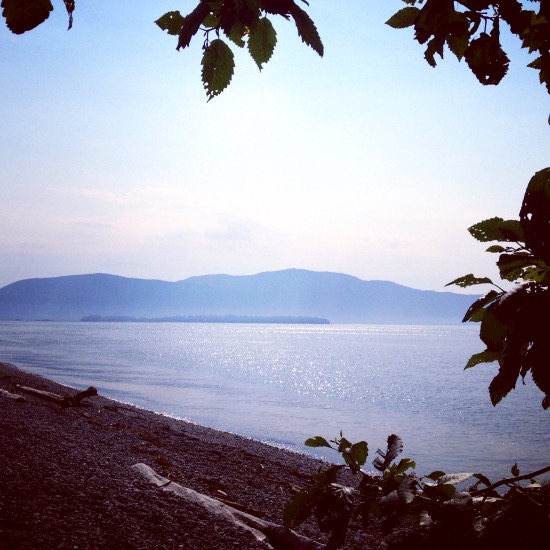 25. Take your Seattle friend back to town to catch her train.

26. Fall into a deeply restful sleep at twilight on the longest day of the year.

19 thoughts on “How to Have a Soul-Satisfying Solstice Celebration”